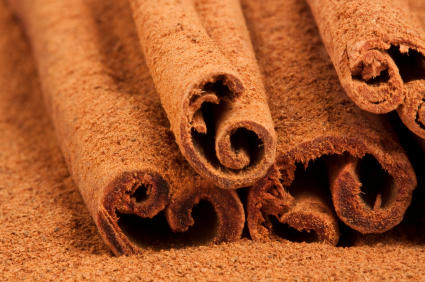 Cinnamon Bark (Cinnamomum verum) is from the Lauraceae (laurel) botanical family.  The essential oil is steam distilled from the bark of the tree.  Cinnamon is reputed to be part of the “Marseilles Vinegar” or  used by grave robbing bandits during the 15th century Plague to protect themselves.

Ancient Oil Cinnamon bark oil has been used in many cultures for thousands of years.  For example, there are many biblical references to specific uses of cinnamon in a recipe for a “Holy Annointing Oil”  Exodus 30:23.  It has been researched as a natural analgesic, blood sugar regulator, and even used to balance PMS symptoms.

Powerful Essential Oil Cinnamon Bark essential oil is highly anti-inflammatory, anti-bacterial, anti-viral, anti-fungal, anti-coagulant, circulatory stimulant and anti-parasitic.  It consistently performs well against  microbes in scientific research and supports healthy digestion.  Cinnamon is very potent and considered a “hot” oil.  It can be irritating to the skin and should always be diluted.  It might also be irritating to the nasal passages if inhaled directly from the bottle or a diffuser.

This information is for educational purposes only. These statements have not been evaluated by the FDA and Pure Home and Body LLC is not intending to diagnose, treat or cure any disease. For medical treatment consult a doctor.